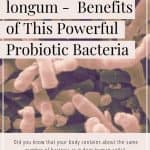 Did you know that your body contains about the same number of bacteria as it does human cells? Not quite the widely touted 10:1 ratio of 10 bacteria per 1 human cell. However, that is still quite an impressive number!

As a naturopath, I have treated many people whose health issues can be traced back to the gut. However, the range of benefits of Bifidobacterium longum extends beyond gut-linked health issues.

In this article, I will explain how gut bacteria affect your health, explain what Bifidobacterium longum is, and how it works to protect your gut. I will also discuss its wide range of health benefits. So dig in and read on!

How Gut Bacteria Can Affect Your Health

The majority of these are “good bacteria”, while the rest are “bad bacteria”; bacteria that may cause havoc on your body if they overrun your good bacteria.

Good gut bacteria are extremely important for your wellbeing. They make vitamins and amino acids and prevent the bad bacteria from overrunning your body. They are also important for the health of your immune system and brain.

On the other hand, when the bad bacteria overrun your good bacteria, you may be more at risk of developing colon cancer, type 2 diabetes, rheumatoid arthritis, and even becoming overweight or obese!

For more on how gut bacteria can affect your health, feel free to read my article!

What is Bifidobacterium longum?

Bifidobacterium longum is a probiotic bacteria found in the gut of humans and most animals and insects. It was first isolated more than a century ago from human faeces. It soon gained the reputation of being associated with gut health since breast-milk fed babies have them in greater numbers than formula-fed babies.

Bifidobacterium longum is one of the most important probiotic bacteria in humans since it provides various health benefits. As a result, it is often added to food to provide additional health benefits.

Bifidobacterium longum is made up of 3 subspecies: longum, infantis, and suis.

How does Bifidobacterium longum (B. longum) work?

B. longum and Gut health

B. longum is very important in maintaining the health of your gut. This is because it is able to withstand gastric acid and bile. As a result, it can survive the harsh environment of your stomach and get rid of the bad bacteria and other pathogens in your gut.

How B. longum works to protect your gut

Keeping the bad bacteria in your gut under control is important for maintaining the health of your immune system.

B. longum helps lower and raise the pH levels of your gut, thus maintaining the health of your gut. It lowers the pH levels by fermenting sugars into lactic acid, and by producing hydrogen peroxide and acetic acid in your gut.

B. longum makes bacteriocins, which are substances that slow down or prevent bad bacteria from growing in your gut.

As impressive as B. longum is for the health of your gut, B. longum can do much more for your health!

A strong immune system can literally mean the difference between life and death. The very young and those on the other end of the spectrum, the elderly, have weaker immune systems.

A study conducted on elderly participants found that the activity of natural killer cells (white blood cells that boost your immunity) remained stable in those taking B. longum, but decreased in those taking the placebo. Another study done on elderly participants found that those who took B. longum were less likely to get the flu.

And what about the effects of B. longum on the very young? A study done on healthy newborns found that infants given formula supplemented with B. longum had better immune responses than infants who were given non-supplemented formula.

Well, it is all well and good that B. longum can boost your immunity, but the real question to ask is “Does it help fight or reduce the number of infections you get?” The answer is a resounding “Yes!”

Influenza aka “the flu” can be quite deadly for the elderly and the very young. B. longum has been shown to have a role in protecting against respiratory functions in these vulnerable populations. For instance, a study found that among elderly participants who were given a flu shot, those taking B. longum were less likely to get the flu.

Similarly, a study done on non-breastfeeding infants found a trend toward fewer respiratory tract infections among those receiving formula supplemented with B. longum.

Are you allergic to pollen? B. longum may be helpful in relieving your symptoms. A study examining the effect of B. longum on Japanese cedar pollinosis, an allergy to Japanese cedar pollen, found that B. longum was helpful in alleviating allergy-related eye symptoms. Similarly, another study found that nasal symptoms such as nasal blockages, itching and runny nose, as well as throat symptoms, tended to improve with B. longum.

If you have high cholesterol, you probably know that you have a higher risk of heart disease. As a result, it is imperative to lower your cholesterol levels.

If you have IBS, you may be aware that the few medications that can treat this condition have been discontinued or restricted for treatment due to adverse side effects. B. longum reduces intestinal inflammation and is effective at treating individual and global symptoms of IBS without adverse side effects. Specifically, it has been shown to “be significantly superior to placebo as well as other bifidobacterium” in relieving IBS symptoms such as abdominal pain, bloating, straining and flatulence.

Is your skin quite sensitive to heat, the cold, and chemicals? Research has shown that when B. longum is applied topically i.e. to the skin, it improves sensitive skin. In a study examining the effect of B. longum on sensitive skin, B. longum was shown to decrease skin dryness and increase skin resistance against physical and chemical triggers in individuals who applied a topical cream containing B. longum.

Do you suffer from NASH aka fatty liver disease? If you do, you may be at risk of developing cirrhosis or scarring of your liver, a serious health problem. A study examining the effect of B. longum in patients with NASH found that after 6 months, various measures of liver function were better in those who took B. longum versus the control group.

B. longum may be helpful in preventing this cascade of events. In a study examining the effect of B. longum  in patients on hemodialysis,  B. longum was shown to decrease phosphorus levels in the blood.

Do you suffer from chronic anxiety? Chronic anxiety leads to higher cortisol levels, as well as decreased memory. B. longum may be helpful if you suffer from anxiety. A study on the effect of B. longum in healthy volunteers, found that cortisol levels decreased and participants reported less anxiety. In addition, their memory improved.Reducing depression

Are you succeeding in your weight loss goals? Congratulations! You may have noticed on the other hand, that you are more constipated than usual. When you lose weight, you may disrupt your gut microbiome, resulting in gut dysbiosis. The result? Worsening constipation!

A study found that participants on a diet and exercise program who frequently took a combination of B. longum and a prebiotic (food for the good bacteria in your body) had less constipation than those who took the B.longum/prebiotic less frequently.

Do you suffer from lactose-intolerance? Then you may be looking for ways to relieve the painful cramps and the bloating that occurs after you consume dairy! In a study examining the effect of B. longum in patients with lactose intolerance, participants consuming milk containing B. longum experienced less flatulence (gas) than when they consumed plain milk.

The main role of Bifidobacteria in babies is to digest the naturally occurring sugars in breast milk which are necessary for a baby’s growth. Bifidobacteria may also improve immunity in infants, leading to less infections.

So, how can we increase Bifidobacteria in babies?

There are a number of ways including:

How to Increase Bifidobacteria in Your Gut

Now that you know about the health benefits of Bifidobacteria (in particular, Bifidobacterium longum), how can you increase their levels in your gut? There are a number of ways including:

I hope you now understand the far-reaching benefits of Bifidobacterium longum. Most importantly, I hope you take the necessary steps to increase their numbers in your gut!

If you are interested in learning more about your own levels of Bifidobacterium longum, you may want to check out our gut microbiome testing program.

If you enjoyed this article, please let me know in the comments section below, and feel free to share it with your friends.